This morning I was pleasantly elated to discover a fact of the calendar and a trio of celebrations coming together. Today, on May 25, 2017 we get to commemorate three major events simultaneously: Bede’s Day, the 40th anniversary of Star Wars, and Ascension Day!

This is just a happy coincidence in the way that these celebrations fall in the calendar. The Feast of St. Bede, always falls on May 25 (in the West), when his death is commemorated (although he actually died on May 26). The Star Wars 40th anniversary marks the debut of Episode IV, A New Hope, released on this day in 1977. And the Feast of the Ascension of Jesus is always celebrated (again, in the West) on the 40th day (traditionally a Thursday) after Easter. Also coincidentally, Bede died on Ascension Day in 735, and they happen to come together again this year.

So I couldn’t pass up a special post in honor of the calendrical serendipity. 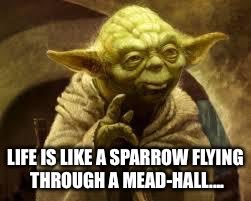 I created this meme this morning, as a mashup of two of the figures I love, Yoda and Bede. The image is fairly obvious, but the textual bit might not be. It’s meant to allude to a story from Bede’s monumental Ecclesiastical History of the English People, which he finished writing in 731, just four years before his death. (You can read excerpts from it here.)

The story is about King Edwin of Northumbria, who sought advice from his advisors about whether or not to convert to Christianity. This event, according to Bede, occurred in 627, early in the conversion of England. It was a major moment for British and Western European history.

In Bede’s account, Edwin calls on his advisors to provide help with his decision, and a certain anonymous man offered this parable (you can read the original Latin here):

The present life of man, O king, seems to me, in comparison of that time which is unknown to us, like to the swift flight of a sparrow through the room wherein you sit at supper in winter, with your commanders and ministers, and a good fire in the midst, whilst the storms of rain and snow prevail abroad; the sparrow, I say, flying in at one door, and immediately out at another, whilst he. is within, is safe from the wintry storm; but after a short space of fair weather, he immediately vanishes out of your sight, into the dark winter from which he had emerged. So this life of man appears for a short space, but of what went before, or what is to follow, we are utterly ignorant. If, therefore, this new doctrine contains something more certain, it seems justly to deserve to be followed.

All of the other advisors agreed, and Edwin decided to convert.

Christian or not, this is quite the striking allegory. It seems to me appropriately similar to the kind of wisdom that a Jedi Master like Yoda would give to a young disciple like Luke Skywalker. And we might recall that there are many parallels between Star Wars and medieval culture.

Incidentally, Bede also wrote a special homily for Ascension Day, in his cycle of Homilies on the Gospels. This collection supplied preaching texts to be read at major points during the church year.

You can read Bede’s homily for Ascension Day here (pdf). I only want to highlight a few passages, which seem apt for Bede’s Day and the 40th anniversary of Star Wars. Especially interesting in connection with the parable of life as a sparrow flying through a hall is the way Bede begins his sermon. He writes:

When he was about to ascend into heaven, our Lord first took care to instruct his disciples diligently concerning the mystery of faith in him. Thus they might preach it with greater certainty to the world, insofar as they had received it from the mouth of Truth himself, and recognized that it had long ago been foreshadowed by the prophets.

In both the sparrow parable and this homily, Bede embraces the mystery of life and faith. He does not pretend to explain it all, but leaves much of the universe to its secrets.

Throughout his Ascension Day homily, and especially at the end, Bede also highlights another connection with the parable of life as a sparrow. Like in the parable for King Edwin, Bede talks about how life is fleeting, and humans only live in this life on a journey to their true home. He says in his conclusion:

[B]ehold, we have recognized that the entrance to the heavenly fatherland has been opened up to human beings by the ascension into heaven of the Mediator between God and human beings. Let us hurry, with all eagerness, to the perpetual bliss of this fatherland; since we are not yet able to be there in our bodies, let us at least always dwell there by the desire of our minds.

In this, Bede embraces the mystery and the transience of the here and now, but also acknowledges the importance of devoting oneself to the right frame of mind in the here and now.

Perhaps Bede’s thinking isn’t all that far from the wisdom of the Jedi. After all, the Force is a mystical experience, too. As Yoda said:

For my ally is the Force, and a powerful ally it is. Life creates it, makes it grow. Its energy surrounds us, binds us. Luminous beings are we, not this crude matter. You must feel the Force flow around you. Here, between you, me, the tree, the rock, yes, even between the land and the ship.

If Bede and Yoda were ever to meet, surely they would have much to discuss.

One thought on “Bede, Star Wars, and Ascension Day”

Check out my author profiles & publications: