One thing that I am continually interested in is how notions of “distant reading” (broadly understood) may be used to think about not only large corpora but also small corpora (as in my Judith project). A few weeks ago, I had a conversation with Yohei Igarashi (recently hired in English at UConn) about his work on Romantic precursors to distant reading–which has led me to consider premodern precursors, particularly by thinking about book history and text technologies. For example, how might we put the notion of “distant reading” in conversation with medieval book lists, manuscript catalogues, tables of contents, or other subjects significant for book history/text technologies? Or how do modern digital technologies encourage, complicate, and cause us to question how we read manuscripts in multiple ways?

More specifically, I’ve been thinking about premodern text technologies of distant reading as manifested in a manuscript containing Hrabanus Maurus‘ commentaries on the biblical books of Judith, Esther, and Maccabees: Geneva, Bibliothèque de Genève, Ms. lat. 22. One way in which I consider distant reading to be built into this manuscript is in the tables of contents for the two commentaries (folios 1v-2r, 38r, 60r-62r). These contents provide summaries for each chapter of the biblical texts, with identifying chapter numbers in the margins–which may be cross-referenced to chapter numbers throughout the manuscript in the margins of the commentary. These tables of contents, then, do not summarize Hrabanus’ commentaries, but the biblical narratives. In effect, they provide one way to distantly “read” each biblical story, as a mnemonic for those who may need to refresh their knowledge of the texts before moving on to the more detailed exegesis in the following pages.

Another instance of a text technology of distant reading is in Hrabanus’ prefatory poem relating the commentary to his patron and dedicatee, the Carolingian Queen Judith (folio 3v, pictured). 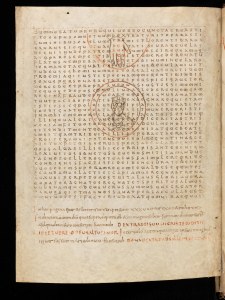 The whole square of text here is a 35-line hymn to God, with each line of the page a distinct line of the poem.* Written in majuscule (capital letters), the whole hymn is a well-planned block of text. In the midst of this page, drawn as encompassing parts of the text, are images of a divine hand reaching down to bless the figure below, a haloed bust of Queen Judith, to whom Hrabanus dedicated his commentaries (in a preface included in other manuscripts). Beyond the visual element, these images have more to say. In the images of the heavenly hand and the bust of the queen, the letters read, “Dextra Dei summi, Criste, Iudith ipse tuere, O Deus, altus amor” (“Hand of the almighty God, Christ, protect Judith, O God, highest love”); and in the outer ring surrounding the figure of Judith, the letters read clockwise, “Dona beata da Deus illi Arce coronam” (“Give blessed gifts to her, God, the crown on high”). Further distinguishing some of these letters, those in the hand of God are written in red, in contrast to the darker ink surrounding them. While Hrabanus’ hymn presents the longer, more intricate poem, more specific verses are stylized within the images. For Hrabanus, the point to distantly read from the whole poem is the prayer for God’s protection and blessing for Queen Judith. This page, then, may be understood as a textual visualization, meant to draw the eye to the central elements. Like all visualizations, it is a representation of text with the purpose of guiding the viewer to the intended message.

The contrast between this page, its layout, how it is read, and others in the codex is also strikingly portrayed using the thumbnail view of the e-codices interface–a modern means of distantly reading a manuscript using digital technology. 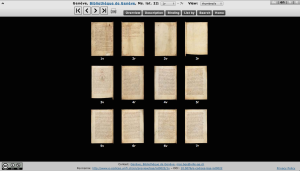 This thumbnail view, in fact, shows us a variety of ways to read with this manuscript. Here we can see the differences in page layouts–the table of contents, two blank pages, Hrabanus’ hymn, and the start of the commentary–as well as how we as modern readers take in the premodern text and book through a digital facsimile. It is also worth noting that such a view (and the e-codices interface in general) disembodies the pages from the material book, just as it simultaneously flattens the pages as digital representations of physical leaves. In other words, the text technologies of the premodern book, its carefully written text, and the digital interface remind us of the complexities inherent in and between distant and close readings.

Check out my author profiles & publications on