I recently had a conversation with two of my pastor friends, Andrew and Rick, about the tensions between religion and politics, both in America and across history. A large part of this conversation revolved around the upcoming presidential election in the United States. At one point in the conversation, Andrew posed a question to me about the historical angle: What does the medieval period have to tell us about Christianity and political engagement? My reaction was to say that there’s quite a lot. And the more I considered the question, the more I realized how much I had to say about the subject.

Over the next couple of weeks, as a lead-up to the US election, I plan to post a series of examples to answer to the question. In this first post, I pose some preliminary thoughts by way of three different cases from the medieval period. In two future posts, I will consider more examples through the lenses of biblical precedents and monasticism as key models for how some medieval people thought about these issues. First, a few general remarks.

The Middle Ages were a hotbed of back-and-forth conflicts between ecclesiastical and governmental leaders as well as discussions of issues still relevant to current disputes about “church” and “state.” To call one side “religious” and the other “political” is disingenuous, since medieval people would balk at such false distinctions as much as politicians who claim their own public stances on government policies stem from their personal religious affiliations. A nuanced consideration poses questions about the interactions, potential separations, and inevitable tensions between Church and State still under discussion. No single, monolithic model emerges, but a variety of possibilities offers room to consider our own views in light of the past. Three examples serve as representatives of some of these issues. 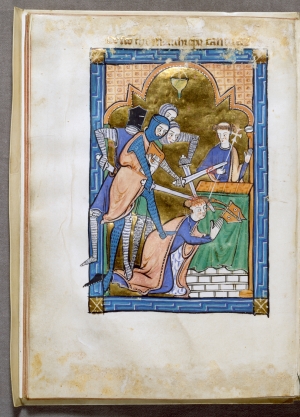 The Maartyrdom of Archbishop Thomas Becket, from the Walters Art Museum, W.34.15V, used under a Creative Commons license.

When Andrew initially posed his question, the first answer that came to mind was the English Archbishop Thomas Becket (c.1120-1170), who was murdered for his conflict with King Henry II (r.1154-1189) about the rights and privileges of the Church versus the secular courts. The story, in fact, presents parallels with our own current moment, since tradition reports that Becket’s murderers took their cue from Henry’s vexed question, “Will no one rid me of this troublesome priest?”—much like some have interpreted Donald Trump’s comments about Second Amendment rights activists taking care of his opponent Hillary Clinton as a nod toward assassination.

The martyrdom of Becket could be understood as a cautionary tale just to stay away from politics altogether. The struggle between the two leaders could, in some ways, be seen as a tale of escalation ending in a zero-sum game: Becket hurled threats of excommunication and church trials, while Henry volleyed back with charges of contempt against royal authority, sending the Archbishop into exile for a time and causing Pope Alexander III to get involved as mediator. But this conflict also underscores the gray area of tensions between church and state. Becket never fully denounced the rights and responsibilities of the Crown, as much as he wanted to demarcate clear boundaries; and Henry never denied the importance of Church authority, as much as he wanted to find his own role in ecclesiastical politics. In other words, both actors in this drama found themselves trying to navigate what it means to be both Christian and politically engaged at the same time.

Another example of how religion and political engagement intertwines is in warrior clerics, as with the figure of Bishop Turpin in the French poem The Song of Roland (composed c.1040-c.1115). This chanson de geste relates the events surrounding the historical Battle of Roncevaux in 778, waged between the Emperor Charlemagne’s Christian army and King Marsile’s Muslim army, focused on the heroic protagonist Roland, Charlemagne’s nephew. Among those at Roland’s side is Turpin, whose battle deeds are celebrated in stanza 121:

(Swift through the field Turpin the Archbishop passed;
Such shaven-crown has never else sung Mass
Who with his limbs such prowess might compass;
To th’pagan said “God send thee all that’s bad!
One thou hast slain for whom my heart is sad.”
So his good horse forth at his bidding ran,
He’s struck him then on his shield Toledan,
Until he flings him dead on the green grass.)[1]

To modern audiences, it might seem odd to find a church leader in the heat of battle, but this was not uncommon in the medieval period.

In many ways, the figure Turpin speaks as much to a representation of the events of in 778 as it does to the religious politics surrounding the First Crusade (1095-1099) contemporary with the poem’s composition and popularity, as many clerics took part in the Crusades not only as prayer warriors but also on the battle-field and strategizing tactics. Surely the setup of the poem’s action as a great battle between the Christian Franks and the Muslim “Saracens” resonated with eleventh- and twelfth-century readers. Much more could be said about the Crusades —and has been said by others more qualified—especially in the disturbing parallels of rhetoric used by recent politicians regarding wars in the Middle East. But even when considered briefly, the example of Turpin in The Song of Roland demonstrates the close ties between theological conviction and military action that might coexist within a single ideological perspective.

For a third case, we might turn to the Italian poet Dante Alighieri (c.1265-1321), author of, most famously, the Divine Comedy. Both his biography and bibliography attest to Christian political engagement. During the twelfth and thirteenth centuries, Italy was swept by internal struggles for power between the Papacy and the Holy Roman Empire, a high point for tensions between church and state in the Middle Ages. Factions of family loyalties developed between the Guelphs, who supported the Pope, and Ghibellines, who supported the Holy Roman Emperor. Even among the Florentine Guelphs, however, tensions were hot, and the faction eventually split into two sides known as the White and Black Guelphs. The Alighieri family had a long-standing loyalty to the White Guelphs, and Dante fought both on the battle-field and in his writings to support their causes. His allegiance, in fact, led to exile from his hometown of Florence in 1302, during which he wrote his magnum opus, which he called the Commedia.

In the first part of the Divine Comedy, known as Inferno—a fictionalized travelogue through hell—Dante uses scathing satire as his mode of political engagement. Throughout his tour of hell, Dante recounts many encounters with various political figures from legend, history, and his own time, offering scathing depictions of certain rivals. For example, while traveling through the fifth circle of hell, reserved for the wrathful, Dante and his spirit-guide Virgil are accosted by a famous Florentine politician named Filippo Argenti: 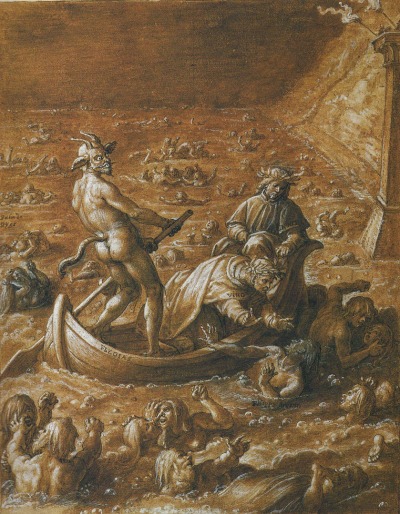 (VII.31-63: While we crossed the stagnant swamp
one cloaked in mud rose up to say:
“Who are you that you come before your time?”
And I to him: “If I come, I do not stay.
But you, who are you, now become so foul?”
He answered: “As you can see, I am one who weeps.”
And I to him: “In weeping and in misery,
accursèd spirit, may you stay.
I know you, for all your filth.”
When he stretched both his hands toward the boat,
the wary master thrust him off, saying:
“Away there with the other dogs!”
[….]
Soon I watched him get so torn to pieces
by the muddy crew, I still give praise
and thanks to God for it.
All cried: “Get Filippo Argenti!”
And that spiteful Florentine spirit
gnawed at himself with his own teeth.)[2]

This moment is surely fueled by personal animosity between the men, since Filippo is assumed to be among the family who both supported Dante’s exile and seized his belongings when he was cast out of Florence. But beyond personal issues, this scene also represents the ways Dante used his literature to strike out at the political leaders of the day. We might even see him as a type of literary John Stewart of the fourteenth century. While this episode is not (on the surface) overtly Christian in its aims, the very framework and details of Dante’s Comedy necessitate reevaluating any neat separation between “religious” and “secular” worlds for medieval people. Dante still used the theological concepts of hell and the deadly sin of wrath to pose his satire. These facets of people’s lives were not separated, but just as complexly connected as the various facets of our own lives in the twenty-first century.

In these three preliminary examples, we find three very different types of political engagements and implications that come out of them. No clear way of synthesizing Christian and political views emerge; and that in itself is a clear suggestion for considering the complexity at work in questioning how these two issues have been navigated historically and how we should navigate them now. Even more, these cases are only a few examples of the many to be found in medieval culture. We will see more instances of the myriad ways that medieval people juggled both religious convictions and political affinities in the posts to come over the next few weeks.

[To continue reading, see Part 2 (on biblical precedents), and Part 3 (on monasticism).]